The decline of habitat for elephants as a result of expanding human activity combined with increasing elephant numbers in spatially separated clusters of conservation areas is a serious conservation problem in Africa. Nearly 80% of the distributional range of elephants in Southern Africa stretches beyond the borders of officially protected areas. This fact leads to deadly conflicts between humans and elephants.

We are a team of biologists and computer scientists who want to alleviate these conflicts by the development of early warning and information systems for humans living near the corridors who regularly get into serious conflict with traveling elephants. Such systems require the robust recognition and categorization of elephant vocalizations. Today, no system exists that fulfills the requirements for automatic recognition of elephant vocalizations under natural conditions.

Elephants make extensive use of powerful infrasonic calls which travel distances of up to several kilometers. This qualifies the elephant as a perfect model species for acoustic observation since it is possible to detect elephants even if they are out of sight. We will incorporate visual information into the automatic analyses where improvements can be expected. We will investigate and evaluate among others automatic statistical methods to detect elephants, estimate group-size from vocalization rates, and classify call types automatically. Another focus will be the manual and automatic analysis of age and gender of the caller due to characteristics in call structure. This will allow us to determine the demography of families and populations. We additionally aim at defining family and bond group specific acoustic signatures and vocal dialects within the study population.

The project is proposed for an initial duration of three years and will be conducted by the Department for Cognitive Biology of the University of Vienna in collaboration with the Interactive Media Systems Group, Institute of Software Technology and Interactive Systems, Vienna University of Technology. One 50% post-doc and two 60% doctoral students shall be employed by the project partners. There is a clear definition of responsibilities and exchange of results between the project partners. At the end of the project, a large set of fully annotated audio and video material will be available together with statistical evaluations of the material. Additionally, novel analysis techniques will be available that are able to robustly recognize and classify elephant calls from data obtained under natural conditions. 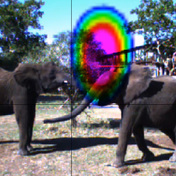