Furthermore, the planned test will be a dynamic learning test; thus, other than conventional tests, it does not only measure a persons current status, but also his or her learning potential. Performance in conventional tests is generally, and particularly when spatial abilities are concerned, significantly dependent on factors such as test experience or experience with similar tasks and materials. Gender differences, which are still frequently found in spatial tests, can partly be attributed to these experience-based factors. Often, such differences can be reduced or eliminated through a relatively short training, sometimes even through a simple re-take of the test. With a dynamic learning test (usually consisting of a pretest, a training phase, and a posttest) the influence of short-term learning experiences on test performance can be assessed, which may yield higher internal consistency and predictive power of the test scores.

The new item material will assess the mental manipulation (rotation, combination, intersection, etc.) of 3dimensional objects. Stimuli and instructions are presented sequentially. Hence, in contrast to most other tests, participants need to actually encode and manipulate mental representations of the spatial objects. Thereby, the range of possible strategies (e.g., comparison of single features and elimination of possible answers) is reduced. In order to guarantee homogeneity of the testing material and to avoid problems such as ceiling effects, item-response-models will be employed for the development of test items as well as for the measurement of change in performance. 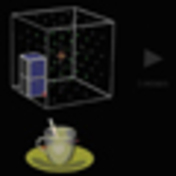