The Invisible Train is the first real multi-user Augmented Reality application for handheld devices (PDAs). Unlike other projects, in which wearable devices were merely used as thin-clients, while powerful (PC-based) servers performed a majority of the computations (such as graphics rendering), our software runs independently on off-the-shelf PDAs - eliminating the need for an expensive infractructure.

The Invisible Train is a mobile, collaborative multi-user Augmented Reality (AR) game, in which players control virtual trains on a real wooden miniature railroad track. These virtual trains are only visible to players through their PDA's video see-through display as they don't exist in the physical world. This type of user interface is commonly called the "magic lens metaphor".

Players can interact with the game environment by operating track switches and adjusting the speed of their virtual trains. The current state of the game is synchronized between all participants via wireless networking. The common goal of the game is to prevent the virtual trains from colliding.

The success of the Invisible Train installation illustrates the advantages of our Studierstube software framework, a component-based system architecture that has been designed to accelerate the task of developing and deploying collaborative Augmented Reality applications on handheld devices. 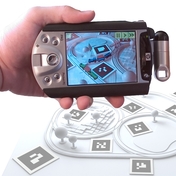