In immersive virtual environments users are placed inside virtual reality simulations. In such systems, menus are needed to change the system state, change tools or issue commands. However, interacting with these menus in VR can be cumbersome, since input devices are not seen by a user wearing an HMD. Therefore interaction needs to be simple and easy to adopt to.This project presents a possibility to navigate VR menus with the help of a smartwatch.

A plugin for the UE4 game engine is implemented
which contains components to create a smartwatch controllable menu. The plugin enables easy creation of smartwatch-controlled menus and plug-and-play interaction via touch input. The communication between a smartwatch and a UE4 application is maintained via an Android smartphone. An Android Wear application running on the watch transmits touch input data to the smartphone over Bluetooth. The data is then forwarded to the UE4 application via WLAN.
The resulting applications and the plugin are tested to detect any issues regarding
performance impact with the help of one of four created example menus. The results
reveal that performance is not affected considerably. 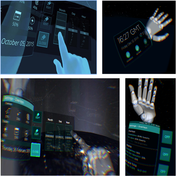