This project combines a number of research activities to create intuitive ways to interact with 3D content in a mobile mixed reality environment. Our aim on these joint research approaches is to investigate novel concepts to create 3D natural user interfaces.

Our investigated approaches include:

We introduce a novel selection technique DrillSample, which allow for accurate selection in a one-handed dense handheld AR environments. It requires only single touch input for selection and preserves the full original spatial context of the selected objects. This allows for disambiguating and selection of strongly occlud

ed objects or of objects with high similarity in visual appearance.

We performed an in-depth evaluation of state of the art hand posture recognition algorithms using RGB or RGB+D(epth) data. Afterward, we modified them to being applicable in a mobile mixed reality environment and to act as a mobile natural user interface (NUI) for markerless 3D interaction (selection, translation). 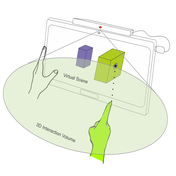