The issue of inadequate haptic feedback in VR/AR setups is an open problem. Haptic or tactile gloves as well as force-feedback devices approach the issue, but only pose a rudimentary solution since it is still very easy for the user to look through the illusion. A novel approach for haptic feedback VR/AR environments is needed.

The recent introduction of new display technologies (e.g. Oculus Rift, Epson Moverio) as well as novel possibilities for natural locomotion in Virtual Environments (e.g. Cyberith Virtualizer, Virtuix Omni) constitute big leaps towards fully immersive Virtual Reality (VR) or Augmented Reality (AR) environments.
However even with a state-of-the-art VR system and highly realistic rendering, a user is constantly reminded that the presented world is only virtual as soon as he or she tries to interact with an object within the simulation. Missing or inadequate haptic feedback poses a severe impairment of immersion in current VR/AR systems, thereby limiting potential benefits and applicability. Immersion is an important factor for the effectiveness of employing VR/AR in the treatment of psychological disorders (e.g. claustrophobia). The same applies for training and psychological experiments, where a transfer of experience to the physical world can be impaired if the user doubts the realism of the virtual world. Insufficient haptic feedback generally impedes the interaction with virtual objects, which is a key aspect in a number of application scenarios, like the training of emergency service personnel.
The issue of inadequate haptic feedback in VR/AR setups is an open problem. The research field of actuated Tangible User Interfaces is studying possible solutions for haptic feedback for user interfaces in general. In particular the term “actuated” relates to the property that parts of the interface can be actively moved by the computer. However the field is still in its infancy, especially when applied to VR/AR systems. Haptic or tactile gloves as well as force-feedback devices (e.g. Geomagic Phantom) approach the issue, but only pose a rudimentary solution since it is still very easy for the user to look through the illusion.
The most convincing haptic representation of a physical object in a VR/AR environment is the object itself. This approach of utilizing substitute real objects is called “Passive Haptics” or "Prop-based Haptics". Nevertheless such objects cannot be manipulated by the computer and therefore would have to be available in every form and on every position required by the simulation.
Our approach allows a new level of immersion in VR/AR. We designed and developed of a fully immersive VR system that can provide prop-based haptic feedback in an infinite virtual environment. Intended as a research tool, it significantly improves the applicability of VR/AR systems for all purposes, ranging from training of emergency service personnel to medical scenarios. Simulation of small interface elements for virtual instruments is possible as well as interaction with larger virtual objects like furniture. 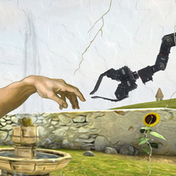