This paper investigates motion estimation and segmentation of independently moving objects in video sequences that contain depth and intensity information, such as videos captured by a Time of Flight camera. Specifically, we present a motion estimation algorithm which is based on integration of depth and intensity data. The resulting motion information is used to derive long-term point trajectories. A segmentation technique groups the trajectories according to their motion and depth similarity into spatio-temporal segments. Quantitative and qualitative analysis of synthetic and real world videos verify the proposed motion estimation and segmentation approach. The proposed framework extracts independently moving objects from videos recorded by a Time of Flight camera. 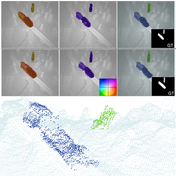